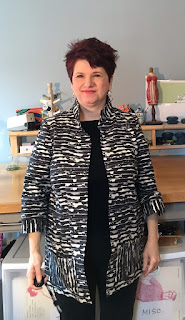 Many years ago, my dear late mother-in-law, who was always so kind, so kind that she would give Hitler the benefit of the doubt, said to me "oh you can't wear a standup collar because your neck is too short". It kinda hurt my feelings and I believed her. Of course, every part of me a short. But you know what? Every time I bought something at the thrift store with a standup collar I liked it. So I looked for a jacket pattern with a standup collar and I found this one: Butterick 6328.

The first one (above) I made with very heavy cotton fabric I got at Fields in Grand Rapids probably more than five years ago. The pattern calls for two complete fronts and has no bust dart. As stiff as this fabric is, that sounded like a really good recipe for a tent. So I drafted a cut-on, fold back facing and added a bust dart. I also added cuffs and patch pockets. I cut the fabric so that the pattern on the cuffs and pockets runs in the opposite direction than the rest of  jacket, like the collar.  I don't believe this picture does it justice. I really like this jacket.

The second one (below) is a knit fabric and, as you can see, the collar doesn't stand up quite as well, though I did use fusiknit in the collar and facing. I again made the facing the same way as the other one and added the bust dart. This one has the inseam pockets that come with the pattern. This fabric is a medium weight knit almost like a scuba knit but not as heavy. 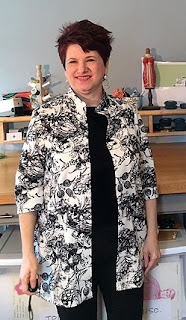 I really like a lot of black and white in my wardrobe so both of these will get a lot of use.

This will be officially my last post here at Room for Sewing.Please follow me over to my new home Let's go get sewn. Its a new beginning!!!!
Posted by chesneykat at 7:51 AM No comments:

I'm not too happy about this one 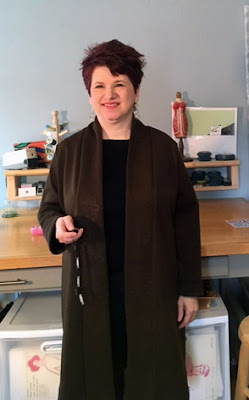 I think the color, length and front bands contribute to the ecclesiastical feel of this jacket. I did learn something making this. I experimented scorching a design into the fabric. I've done this before with a slinky fabric but never with a double knit and I was just curious to see whether it would work. Here are some detail photos of it:


The fabric was from the Great fabric sale and arts and scraps.  I probably won't wear this and for sure I will not wear it over black sweatpants and a black T-shirt. But I might make the pattern again in a sweater knit, a little shorter though and maybe with the dress that goes with it.

Even failure is a learning experience.


Posted by chesneykat at 1:20 PM No comments:

And I don't mean PJs. What I mean is that this pattern seems like it's just afterthought. I think most people probably bought this pattern, Simplicity 2474, for the jacket or dress, but hiding there in the middle is this beautiful little cardigan. I like it so much I made it six times. That's my strategy for stash busting: when I find a pattern I like, I look for more "candidates" in my stash and I make it several times while the construction is still fresh in my mind.

The first version was this orange one was straight out of the envelope. The only adjustments were a little shortening. Sounds like pie, right? Not that kind shortening! This is a Sophia double knit from Vogue in Chicago. This color is called hot sauce and I have a skirt already in the same color. 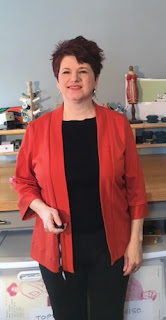 The second version was this pale pink shell color. Also Sophia double knit. I shortened it even a bit more. I really love this one. I feel very Jackie Kennedy in it. Not so much though when I'm wearing sweat pants, like I was the day I took all these photos. 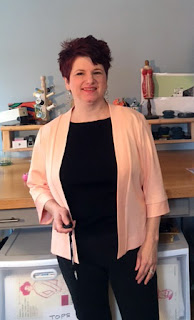 The third version is a double knit  polyester from the Giant Fabric Sale at Arts & Scraps. It looks great with denim leggings. I have a brown skirt that goes with it also. 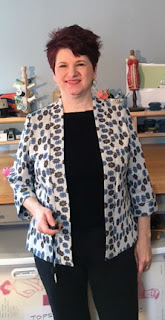 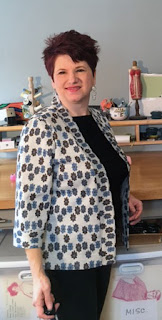 The fourth version is made with the knit I picked up from JoAnn fabric for Christmas time. 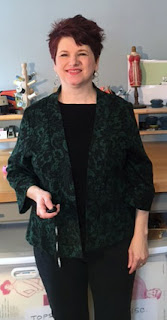 The fifth version I made for my sister. I copied the pattern and shortened it even more for her. I made a skirt to go with hers as well.  It was a raspberry double knit with a diamond pattern. I wish I had a picture of it.

The sixth version is up in my sewing right now. But you'll have to wait till we go over to Lets Go Get Sewn to see that one.

Dear readers, as I mentioned in my last post I have been doing some sewing the last few months but not blogging. In my next few posts, I will be catching up on all the undocumented projects as I transition over to my new blog home.

I made these two skirts last fall. I used my T&T knit skirt pattern (Butterick 5539). One is my usual length, and the other is maxi length. The fabric for both of these came from the Great Fabric Sale at Arts and Scraps. They are both brown and white knit double knit polyester the other shoppers passed over but I have a strange affinity for.

I have yet to wear the shorter one as it's still a bit cold around these parts. Maybe soon though, since today is the first day of spring and also my husband's birthday btw. 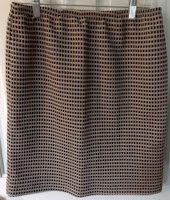 I wore the maxi one for the first time to church Sunday. 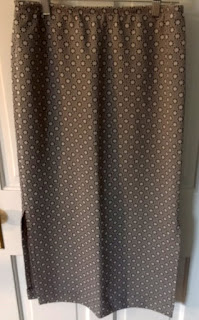 I wore it with a teal top, my excellent teal shoes(thrifted for $6.80), a brown and white patterned sweater(also thrifted), and a string of my hand-knotted pearls. I also wore my beautiful, thrifted of course, brown cashmere coat with a mink collar. 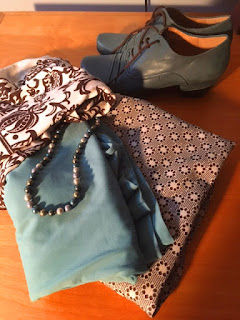 See you soon over at Lets Go Get Sewn!
Posted by chesneykat at 6:08 AM No comments: 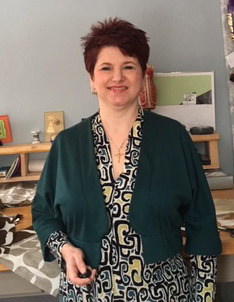 Dear readers: this is one of the things I sewed last summer that I never got around to blogging. In person I think it looks cute, but when I see the pictures I'm not so impressed with it. I made it with a Sophia double knit from Vogue fabrics in Chicago and simplicity 1665.
I do think it would look cute over the dress that goes with it. So I may make it again the next summer.

Also I made this blog post using Dragon and took the photo above with my iPhone and using a remote shutter release. I think I need to increase the resolution of the photos, but it should definitely make picture taking and blogging more streamlined for me. I have about 10 more garments to blog before I'm actually caught up and can officially switch to the new blog. Can't wait to meet you there!
Posted by chesneykat at 11:21 AM No comments: 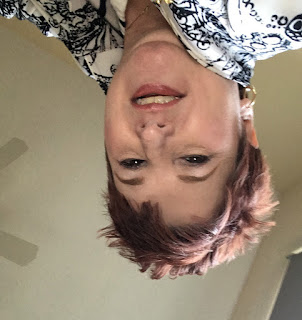 Dear friends, I started this blog five years ago. I have not been blogging very much lately due to my health but I've been having more good days than bad lately. Praise God. I have been sewing a bit but not blogging. I promised in my last post big changes here at the Room for Sewing and I'm ready to announce some of those changes now.

From the very beginning I disliked the name of this blog. It's lame. And I am a word person. Every name that I came up with that I thought was cool or clever I found was already taken by someone else, even if they weren't actually using it. I really wanted to call it "your yardage may vary." Anyway, to celebrate my five years anniversary I am officially going to change the name of this blog to:


Some of you may recognize the play on words from an old song first recorded by Ray Charles then Joe Cocker called "Let's Go Get Stoned." We won't be doing drugs though. Drugs are bad.

I have also begun using Dragon to do the dictation since I'm such a bad typist. Also, I am going to start using my iPhone as my only camera. I found a Bluetooth shutter release for the iPhone and  an adapter to attach it to a tripod. This should make taking the photographs much easier, which anybody who has a blog knows, is the hardest part.

I have also officially gone through the "change of life" as they call it and I have a cool new haircut to prove it. I am looking forward to this new chapter in my life and a continuation of the remission from the daily migraines.

Hopefully soon I'll be able to catch up photographing some of the items that were sewn last year and the beginning of this year. I hope those of you who've still follow me will go over to the new blog when it's officially up and running. It exists now but there's really nothing on that page yet.  I really would like to wrap this blog up before I start the new one up officially. Many thanks to those of you have been with me this past five years and I look forward to many more years together.

Big Changes in the Room for Sewing!!!

Posted by chesneykat at 9:15 AM No comments: